The singer and guitarist Lenka Filipova studied at the Prague conservatoire, and after that, at the international music academy in Paris, specified on the classical guitar. 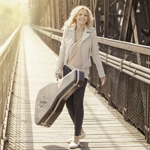 Up to present, she has produced ten albums in song and tune, also four albums on classical guitar. Most of her albums were awarded gold disc and also platinum disc. Lenka also writes her own songs from which a lot of them turned into big hits throughout central Europe.

She has toured throughout all of Europe, Japan, USA, and Canada. She gained the Grand Prix title in the guitar festival in Antil in Holland.

In 1997, she won Czech grammy and made 2 tours with Francis Cabrel. Lenka speaks very well in Russian, French and English. Her latest achievement was her new album entitled "Oppidum".

In June 2008 the Canadian singer Celine Dion chose Lenka to perform as a guest of her Prague concert in the O2 Arena.